When I started with Instagram about a year ago one of the nice things I discovered were the challenges, like Inktober and the 100 Days project. You set a goal by creating something new every day in a self chosen theme and post it on Instagram. This way you’ll get in a nice flow and work around a theme. For me the sometimes quite random sketches formed the basis for new illustration projects. These projects and challenges over a longer period can be a very good way of working on your portfolio.

The sketchbook page of the Two Sisters was one of the Drawing People with Nature posts for the 100 Day Project. A photo of my grandmother (seated) and her younger sister, on display at my father’s desk, formed the inspiration of the drawing. It must have been taken around 1915 in Amsterdam. In the 19th century my great grandfather (with the very exotic name of Milutinovic) emigrated from Serbia to Amsterdam, where his two daughters, my grandmother and great-aunt, were born. 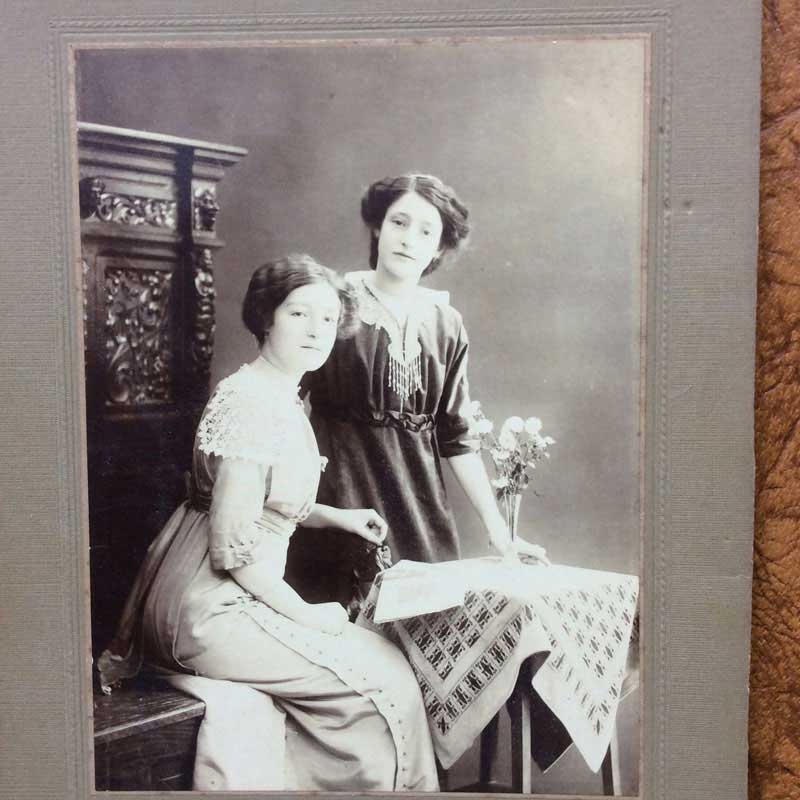 These young women are part of a fantasy, a dream or another story and this way it’s beyond an ordinary portrait, which I like. 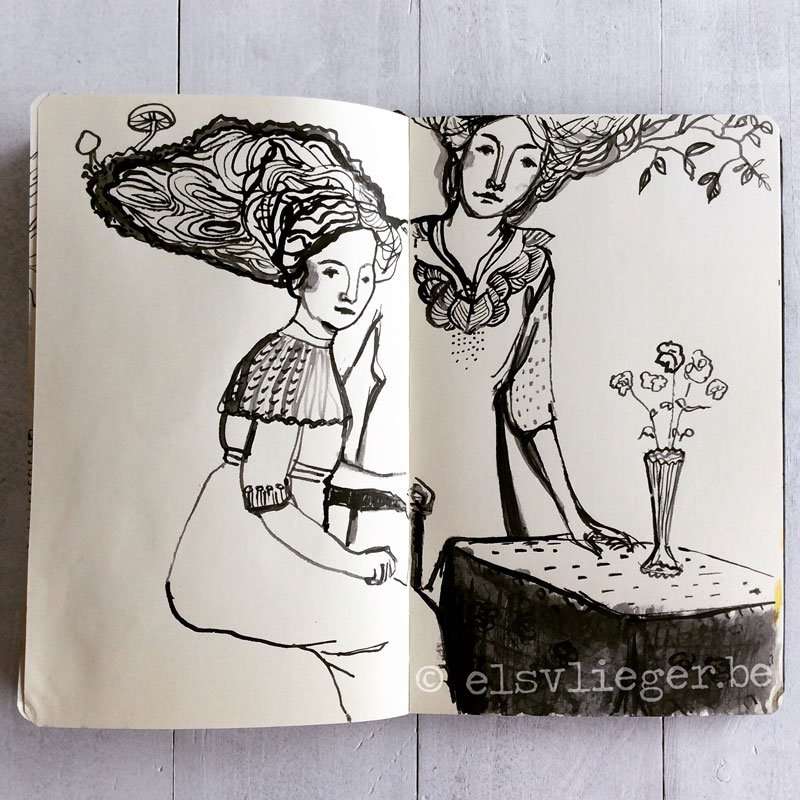 In this sketchbook drawing you can see that initially I drew the same haircut my grandmother has in the photo. But later on I decided to scribble outside the outlines of the hairdo and created the more interesting tree bark haircut. For me it’s not only a more visually appealing change, it also creates a new storyline. These young women are part of a fantasy, a dream or another story and this way it’s beyond an ordinary portrait, which I like. 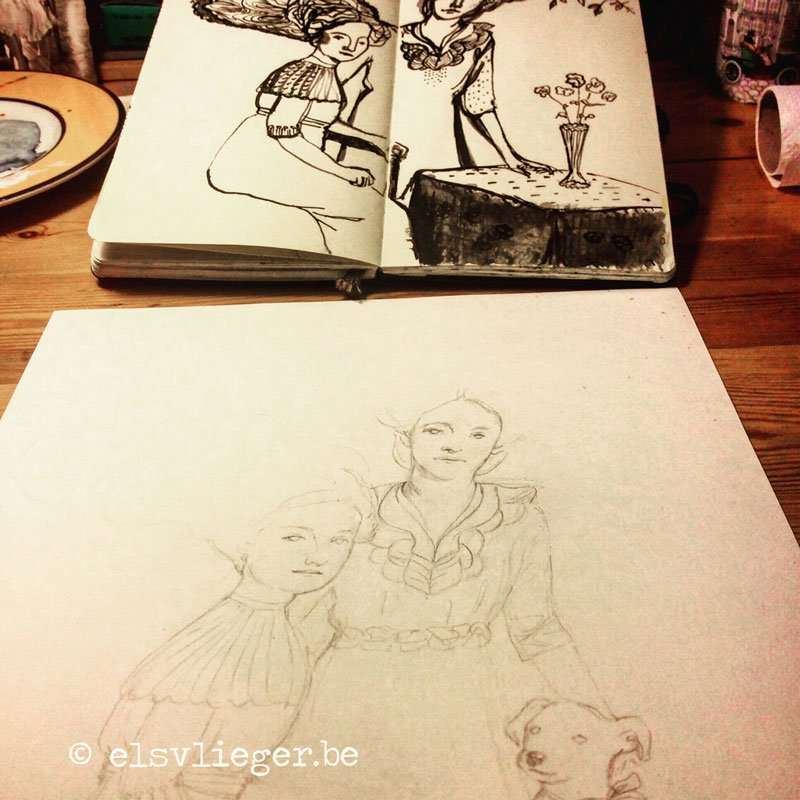 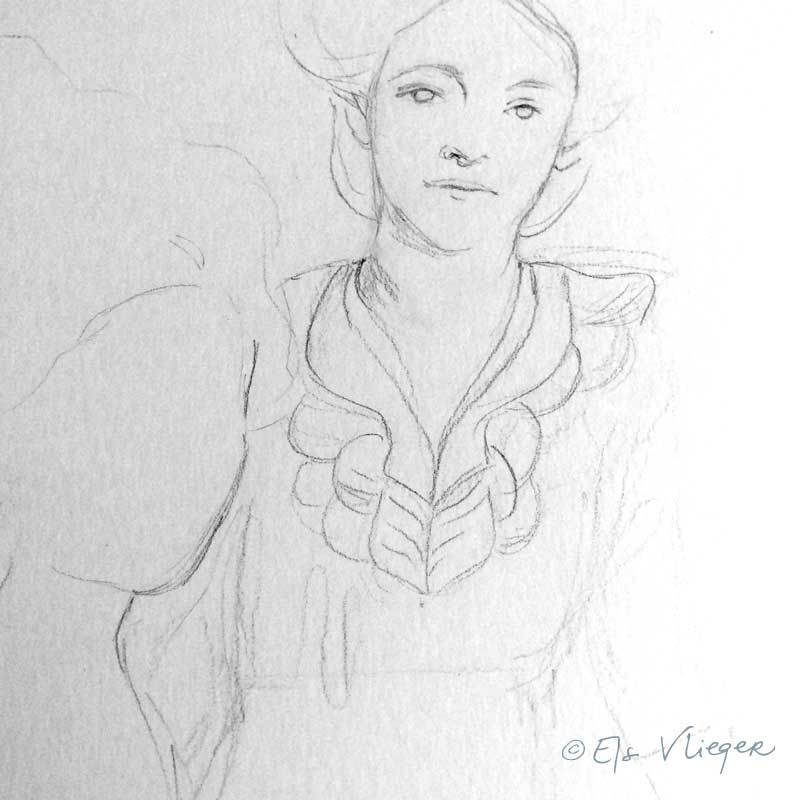 In the painting I wanted the ladies to sit in a pristine landscape, their natural habitat. And since I lost my heart this summer to the Scottish Highlands I used one of my Scotland photos of a breath taking, empty landscape to become the background. A little pet dog that you often see in vintage photographs had to be their companion in the painting. 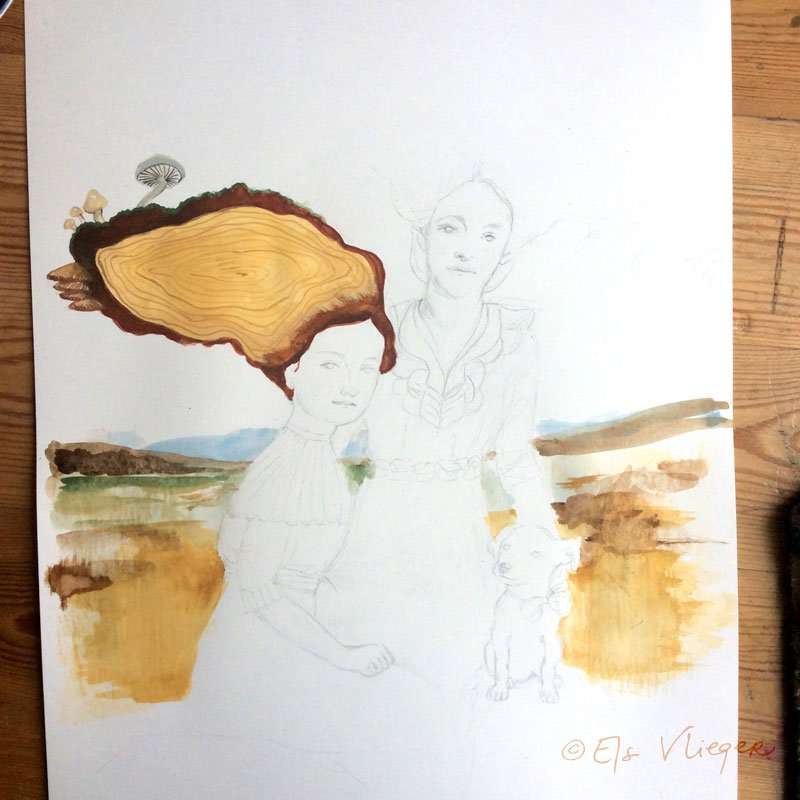 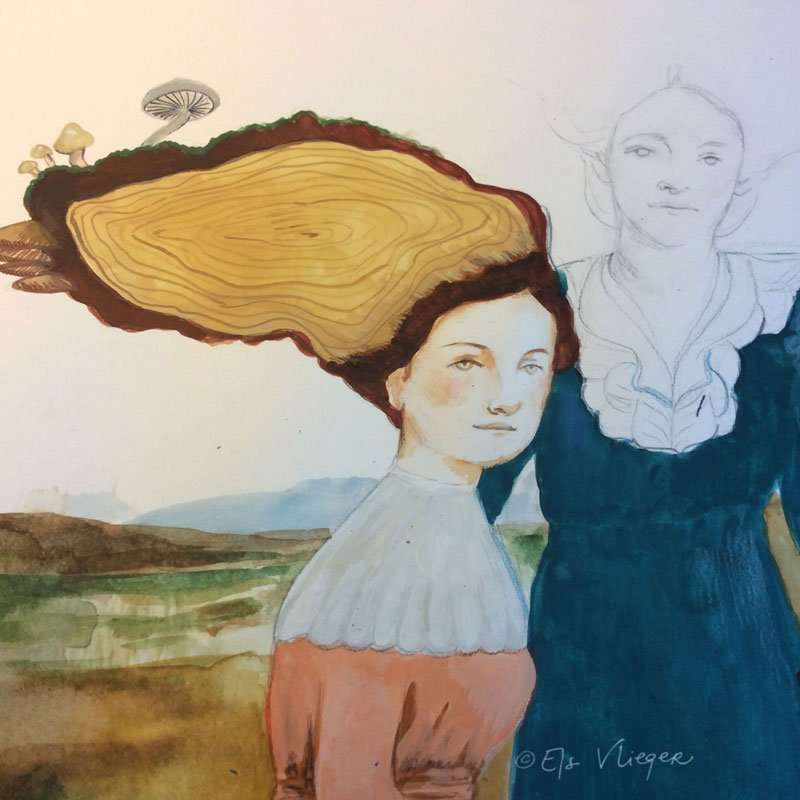 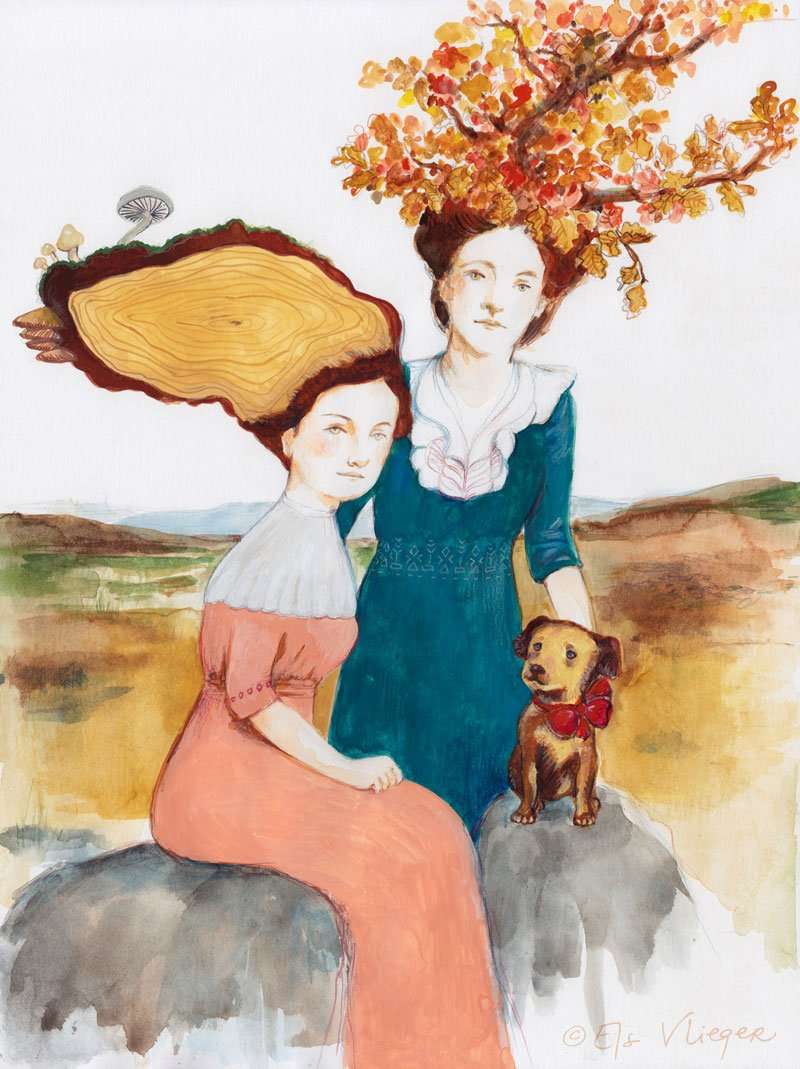 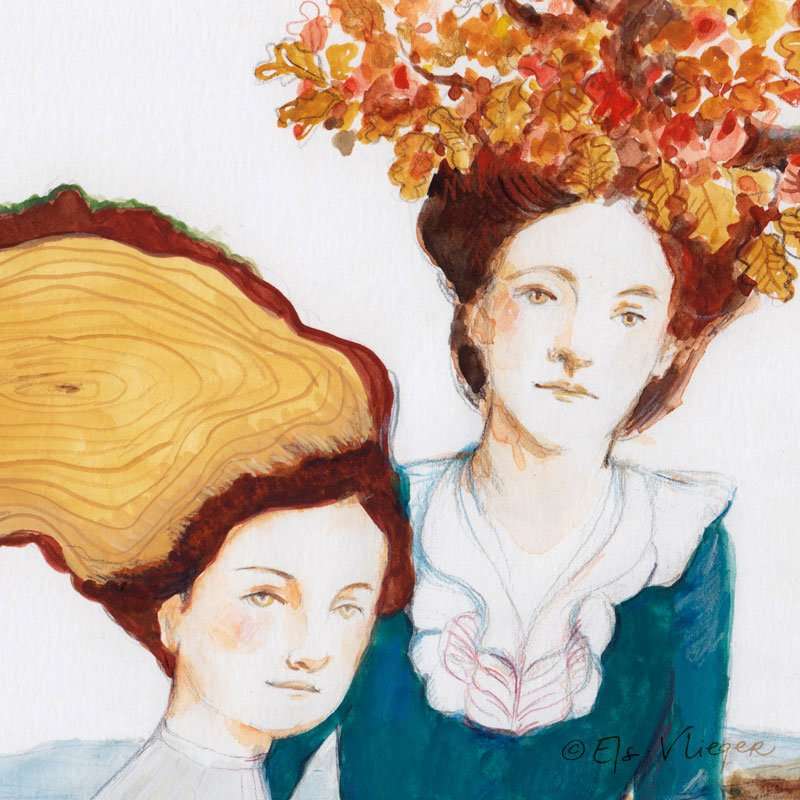 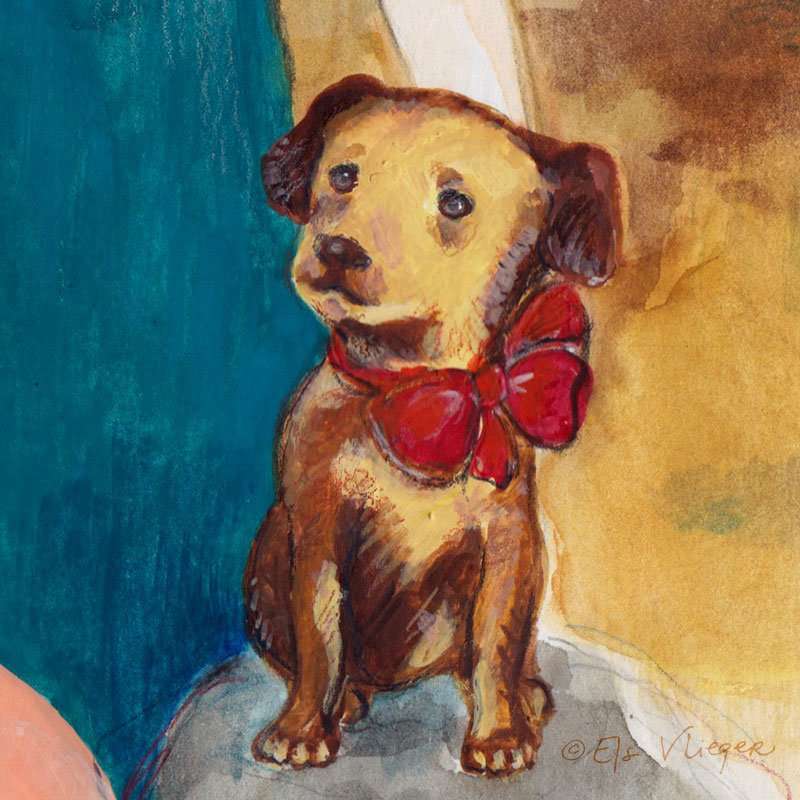 This site uses Akismet to reduce spam. Learn how your comment data is processed.

My work is registered here: